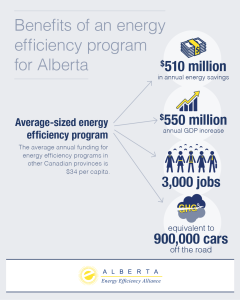 In fact, energy efficiency programs currently exist in every province in Canada and state in the U.S. except Alberta. This was discovered as part of research undertaken by the Alberta Energy Efficiency Alliance (AEEA), a grantee of the Alberta Real Estate Foundation.

Research conducted by the AEEA has identified that most energy efficiency programs in Canada and the U.S. are funded every month through a modest charge on utility bills. The funds are then used to help households and businesses reduce their energy consumption and save three to four times more money than they cost.

“Most energy efficiency programs need to report publicly to an energy regulator to make sure they’re making good use of consumer dollars,” adds Row. “Not only have programs demonstrated a suitable return on investment for consumers over the years, provinces and states have increased their funding as they’ve seen that energy efficiency is the cheapest way to meet increasing energy demand.”

More recently, energy efficiency programs have also been used to stimulate the economy and create jobs during economic downturns. During the last recession and recovery in the U.S., numbers compiled by the AEEA show that funding for energy efficiency programs went from US$3 billion in 2007 to US$8 billion in 2011. This funding increase happened at both the state level and through the U.S. federal government (mainly though the American Recovery and Reinvestment Act). Not only did energy efficiency programming in the U.S. increase during their last recession, it has maintained this level of funding as states continue to see a strong return on these investments.

For the real estate sector, the launch of an energy efficiency agency in Alberta creates opportunities to deliver more value-added services to clients. Energy efficiency programs in other provinces and states are very popular with households and businesses. These programs typically provide direct support for consumers, including financial incentives, to save energy through a combination of behaviour changes and physical upgrades to properties. The real estate sector is ideally positioned to help consumers take advantage of these new programs.

Once these programs are in place, the benefits to Alberta’s real estate sector are significant. A recent study commissioned by the AEEA shows that even an average-sized energy efficiency program for Alberta has the potential to result in over $200 million in additional energy efficiency upgrades to homes and buildings in the province each year. These investments lead directly to increased property values and over $500 million in annual energy bill savings for consumers. These savings can then be reinvested into other parts of the economy and create additional economic benefits for the province.

Keep up to date on the latest energy efficiency developments in Alberta through the Alberta Energy Efficiency Alliance (LinkedIn, Twitter, Facebook) or by signing up for an AEEA membership.